Released in 2015, Brad Bird finally delivered his most eagerly anticipated futuristic fantasy; Tomorrowland. It is a glittering combination of wishful thinking and hypothetical fiction. The movie delivers messages of ethical opposition against social cynicism, distrust and disillusionment. Grossing $209 million across the the world. It gained wide spread praise for its original themes, visuals and premise.

Tomorrowland movie is packed with futuristic ideas and heavy visual effects with a star studded cast this family movie is very audience-friendly.

The title of the movie is inspired from the Fantasyland area of Disneyland. The “It’s a Small World” ride inspired Bird to present visions of an unspoiled future with high-rise buildings, extensive highways, spotless mass transit and perfectly function clean technology. It is a world where there are no traffic jams, slums nor factories producing poisonous smoke. It is an innocent Utopian world without vice, you won’t find anyone drinking too much alcohol, you won’t find people gambling in an online casino, and you won’t find any overt displays of sex. The film embodies the very antithesis to Ridley Scott’s Blade Runner (1982).

Brad Bird, who took on both director and co-writer duties for this movie has created a cultural master piece that is opposed to contemporary culture. In this movie, Bird once more shows the impulses that have driven some of his previous films. In the film, Brad Bird emphasises that there are evil forces trying to ruin the achievements of the world’s greatest, brightest and most sensible men and their frustration with those who hamper and prevent excellence and progress. He artistically weaves their groans and grumblings underneath the shiny and glittering surface of Tomorrowland. Although not very clearly stated, the character of Frank (George Clooney) portrays the disillusionment and frustrations of modern inventors and scientists as politicians and economists impede the advancement of technology and science. Indiscreetly the movie is attacking the culture of this present world and cries out for change. It sends a message that it is time to give the inventors and scientists of today a chance to prove that their inventions can help in the progress of the current generation.

The movie starts with an opening scene featuring Frank Walker speaking to the the audience:

“When I was a kid, the future was different.” 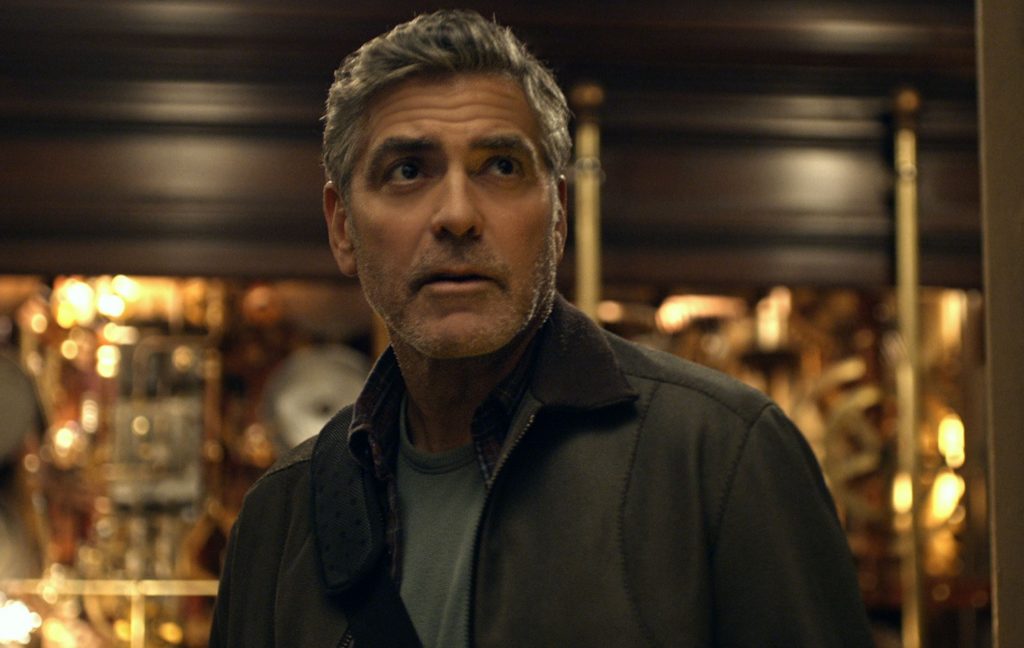 A very intriguing statement; Immediately we wanted to know how he saw his future. In the scene that immediately follows we see a young Frank eagerly carrying his homemade invention of a “jet pack”, to the World’s Fair. His homemade invention was actually a vacuum cleaner. This is to show the young audience that they can invent anything from appliances, tools and anything they can find at home. Young Frank is giving hope to the young audience that like him, they too have great ideas and make these ideas into something tangible. His enthusiasm and eagerness are attitudes that everyone should have in order to achieve something in life.

Frank’s invention needed more time in the laboratory, but just the same he brings it to the World’s Fair. Along the way he meets a girl name Athena (Raffey Cassidy), with a very British accent. Soon after their meeting, Athena brings Frank into a secret world of the future known as Tomorrowland. It is a world full of tall slender skyscrapers, flying trains and highways that stretch into an infinite horizon. The people in this world were very fashionable. Upon returning to the real world, Frank is presented with a badge by Athena which allows him access to this new secret world.

The movie fast forwards to forty-five years later. Another teenager, Casey Newton (Brittany Robertson), has the same fantasies as Frank. She dreams of flying and is obsessed with a disused NASA rocket launch site in Texas that is already demolished. Her father used to work in this launch site as an engineer. Athena, who hasn’t aged a day, sneaks a pin into Casey’s belongings without her knowledge the day before he sneaks into the launch site and tampers with the machines that are demolishing the building and gets arrested.

When Casey receives her personal things, she discovers that there was a badge that did not belong to her. She wanted to return it, but the guard told her to take everything with her. She later discovers that when she touches the small badge with a big “T” inscribed on it she is immediately transported to a beautiful wheat field, while riding in a car with her father. This was the wheat field she heard her friends talking about and which was in a faraway place. Amazed, bewildered and confused, she bounced back to Houston. She realised that she did not know how to control the badge. But that did not stop her from using it again. She visited places such as the City of Arts and Sciences in Valencia, Spain. But it also brought her to dangerous places and was chased by robot police, goons and some suspicious vintage toy shop owners. Eventually she searches for Frank, a known scientist and inventor who was living in isolation and wallowing in his frustration, bitterness and disillusionment. At their first encounter Frank was not very welcoming of her, but Casey was persistent and determined. She forced her way inside and refused to be driven away until she hears an explanation of the badge. Frank mellows and explains to her what the badge is all about and teaches her how to access Tomorrowland and its mysteries.

There is a touch of reality in the encounter between Frank and Casey. A grouchy old man who has resigned himself to disillusion is overcome by the enthusiasm and energy of a young person. When we see your own self in another person, especially a kid, we cannot help but be contaminated by their enthusiasm and optimism that there is still something good that could happen in the midst of bad things and situations. There is still a better future to come. The movie aptly portrays the innocence of the young and their belief in the goodness of the world.

This is the point at which the movie really kicks into gear, so I will leave further plot points for you to see for yourself in the movie.

Tomorrowland puts emphasis on the interactions between the cast rather than action, while this may be too cerebral for some people, I for one welcome this deeper approach to film making. All throughout the story, there is coolness and a vision of a possibility of a peaceful world in the future. There is a message of hope that tomorrow will be brighter, serene and beautiful. Viewers will talk about the lines spoken by the characters. Take the line of Frank when he says “Do I have to explain everything to you? Can’t you just be amazed?” That is very true. People ask too many questions and seek explanation for everything. And at the end, they are more confused and have no answers. It would be simpler to be amazed and awed. We make life complicated by seeking answers for everything. Frank teaches us a lesson that life is simple and we have to accept and appreciate everything that happens in our life. The exchange of conversations in the movie is loaded with messages, lessons to be learned and gives hope and inspiration to all.

Despite the lack of action, Tomorrowland is not a slow paced story. It has a brisk pace. From a kid full of enthusiasm and eagerness, we are carried to the time Frank is already 45 years old, disillusioned, embittered and withdrawn. Casey is able to affect him and together they have endless chases, escapes and shootouts as they are hurled into space, time and other dimensions. Bird has successfully stricken a playful tone into the movie. The wild momentum of the action is fun and exciting. It makes you sit at the edge of your seat. It takes you on a spectacular ride most of the time and when you are about to cool down a bit, you want to jump in again. You would not want to miss any single moment, least you are left behind.

On the technical side, the movie is a masterpiece of choreography, game style sound effects, editing, design and mesmeric music similar to what you’d find in a casino online. The movies is packed with different plots. A young girl seeks out for an old scientist who knows how to get into a secret world of the future where brilliant scientists are trying to create a new world where there is peace and harmony. This new world is a preparation for the death of today’s world. There is the plot of the young boy who was so eager to present his homemade invention in the World’s Fair and his encounter with a young English girl names Athena, who has a secret. Other plots include scenes of people existing at the same time in two different time zones, while driving, falling, walking or running.

If you listen to the conversation in the movie, you will hear warnings about the predicament of extraordinary people in an ordinary world and what we have to pay for destroying the natural environment and making a demon out of science. The movie is the most captivating and conservative way of attacking the culture of contemporary society.

There is a soft side to the movie. Near the end is a scene that is shamelessly sentimental, but even so evokes a lot of emotions that are confusing and mystifying. It was the first time I ever felt like that. It breaks your heart and you want to cry. Yet my eyes were dry. I wanted to feel happy and sad at the same time. In fact, I could not pinpoint what I was feeling at the moment. It is also very rejuvenating and full of hope. 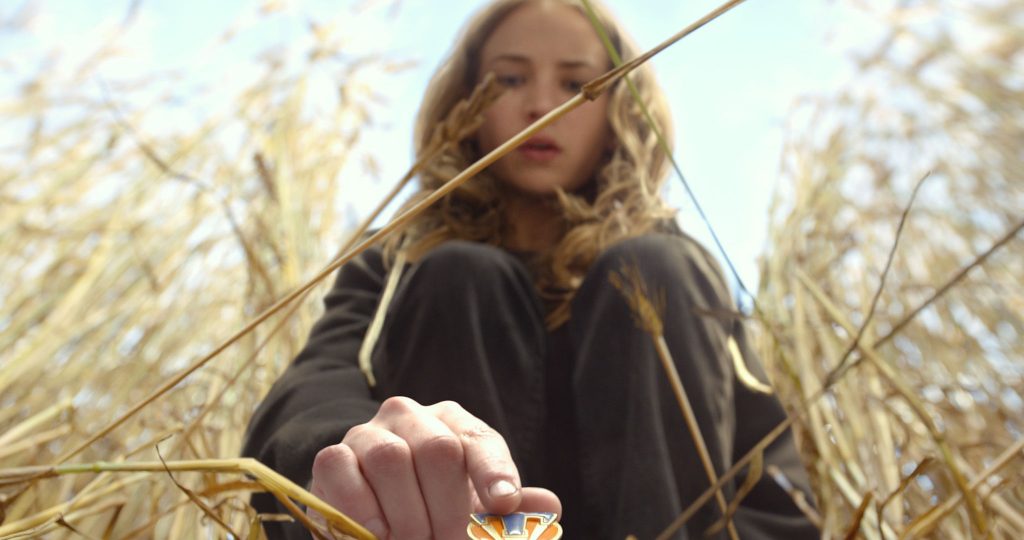 As a director, Brad Bird has once more proven his directorial skills for excellent sequencing and imaginative design. He was able to produce lots of fun and unforgettable adventure set pieces. There were some amusing or unique slower moments in between big moments. His idea of adapting the Disneyland theme park attraction as the focus of this huge adventure film was brilliantly handled. It is a very timely and significant story that provides genuine themes and emotions as we journey with the characters. Bird is very skillful when dealing with dimension and space. He is gifted with action that is sprinkled with physical comedy. He keeps everything moving despite moments of dullness when conversations becomes lengthy and bogged down by sci-fi exposition.

The visual effects were mostly realistic and authentic especially when it comes to exhibiting advanced technology and inventions. This brings me back to the opening statement of Frank about how he sees his future when he was a kid. This is how he saw his future, a world of advanced technology and invention. His future has now become a present reality.

It is a must see movie for the whole family. You will have lots to talk about when you come home!